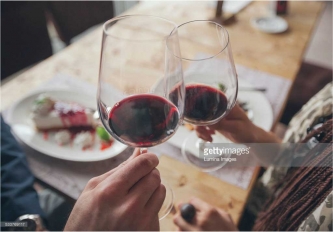 Cabernet Sauvignon is one of the world’s most widely recognised red wine grape varieties. It is grown in nearly every major wine producing country among a diverse spectrum of climates.

The grape is a product of a natural genetic crossing between key Bordeaux grape varieties Cabernet Franc and Sauvignon Blanc. Cabernet has a large number of blending partners in particular Merlot and Cabernet Franc.

Today Cabernet Sauvignon is the second most widely planted red wine grape in Australia, following Shiraz with which it is often blended.

Planted in cool climates, Cabernet makes firm, tannic wines that recall red currants with a touch of tobacco or green bell pepper, and in warmer climates it makes softer wines with flavours like ripe black currents or black cherries. It almost always has substantial tannins, which help great Cabernet age for many years.

In parts of Australia, particularly the Coonawarra wine region of South Australia, Cabernet Sauvignon wines tend to have a characteristic eucalyptus or menthol notes.

One of the most noted traits of Cabernet Sauvignon is its affinity with oak, either during fermentation or in barrel ageing. In addition to having a softening effect on the grape’s naturally high tannins, the unique wood flavours of vanilla and spice complement the natural grape flavours of black current and tobacco.
Cabernet Sauvignon performs best in well drained gravely soils. Being a late-flowering and late-ripening variety, Cabernet Sauvignon grapes mature slowly. This can work for or against the wine quality; in a cold season or climate there is a risk of the grapes failing to ripen fully, while in most other conditions the steady rate of progress offers producers a wider choice of harvest dates.

Cabernet Sauvignon is grown across almost all of Australia’s wine regions, the prominent being Coonawarra and Margaret River.

Coonawarra’s latitude and temperature have been likened to Bordeaux and its unique narrow strip of terra rossa soil allows it to produce Cabernet of distinction and refined structure. Most Margaret River and Western Australian Cabernet’s (including Mt Barker) benefit from the addition of Merlot.

In Victoria, Cabernet’s from the Yarra Valley are noted for their balance in acidity, tannins and fruit flavours.
Other notable Cabernet Sauvignon regions include Central Victoria, McLaren Vale in South Australia and in NSW, Mudgee and the Hilltops produce rich and well-structured Cabernet Sauvignon worthy of cellaring.

Cabernet Sauvignon is a very bold and assertive wine that has potential to overwhelm light and delicate dishes. The wine’s high tannin content as well as the oak influences and high alcohol levels associated with many regional styles play important roles in influencing how well the wine matches with different foods.

The classic pairing with Cabernet Sauvignon is lamb, but it goes well with almost any meat – beef, pork, venison even rabbit.

It is important to look at the accompanying ingredients with bitter edged vegetables like broccoli, radicchio and Brussel sprouts matching well, while pungent, piney herbs like rosemary, mint, basil and thyme go hand in hand with Cabernet’s eucalyptus and cedary elements.

The wine can typically pair well with a variety of cheeses such as cheddar, mozzarella and brie, but full flavoured or blue cheeses will typically compete too much with the flavours of Cabernet Sauvignon to be a complementary pairing.

Working with AWC has been nothing but a pleasure. Gavin’s knowledge and enthusiasm has brought a fresh and exciting new life to our trading. The food and wine pairing is a winner!

Subscribe to our BLOG to stay in touch with wine and industry news and events.